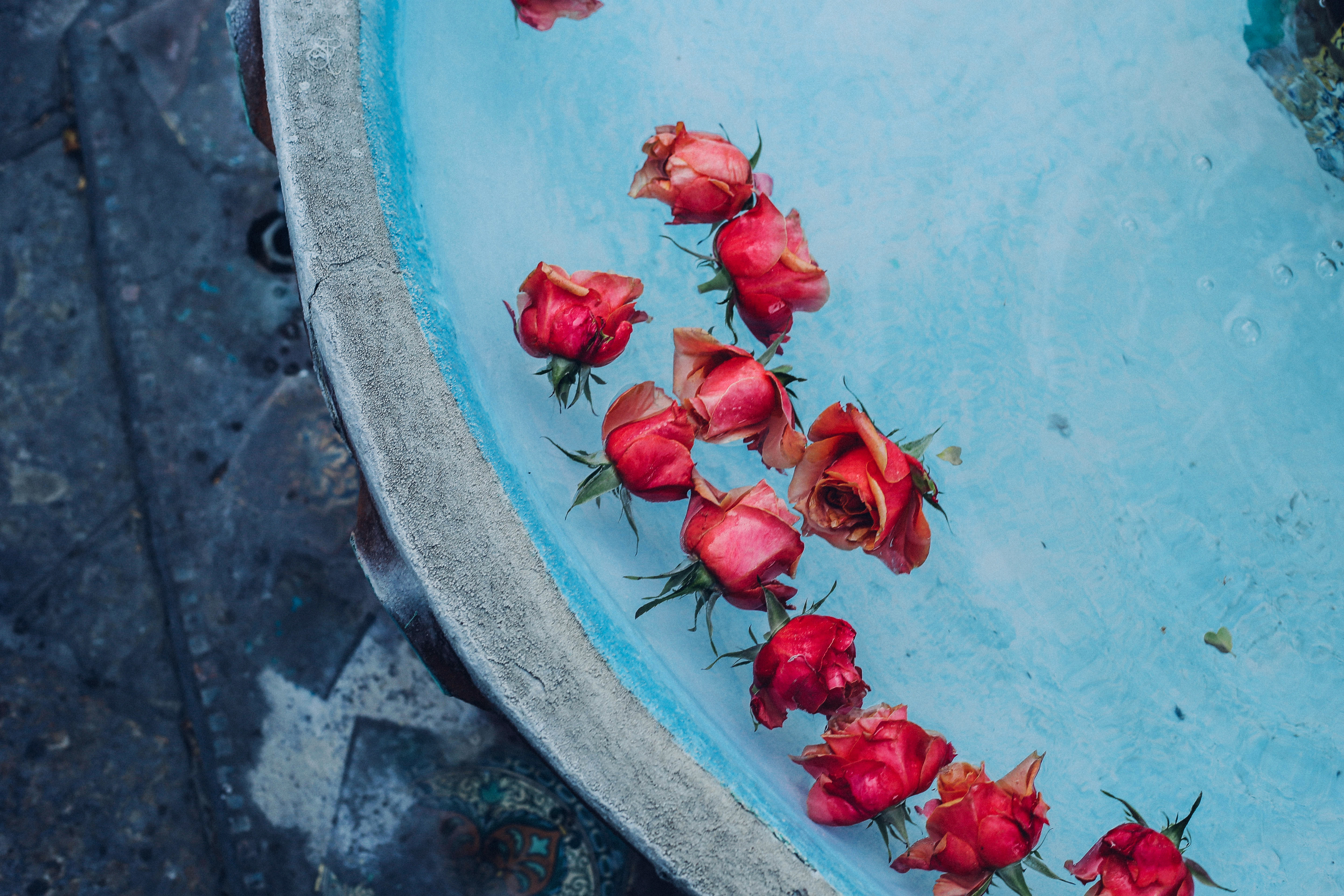 Roses in a Fountain

I wanted to get to it, trust me. But the farther I walked, the farther I got. That is, from both where I was coming from and going to.

The forest likes to grow. That’s what they always told me and I will always say for the rest of my life. It never stops, not for you, not for your love, not for the sun. It keeps going, grabbing vainly at whatever is within branch’s reach. Scraping the bottom of the soil for the last drops of water, for the last nutrients, for the last wisp of life.

And that’s exactly what I came to find. The wisps of life. They flow all around, as the saying goes. All around in an invisible universe, not far from this one. In a place that we can see clearly because it is our own. Everything that we can’t see must be somewhere, and that’s precisely where the wisps of life float.

They gather in clumps commonly, tending to stay in groups so that way they can pulse as one, rather like a firefly, so that living organisms know where to go. When they come in contact with a living thing, they usually take the form of an idea, a spurt of growth in a plant, or a child’s thought to run away with their run-away bag. But usually they’re the growth spurts in children. They’re the “light bulb moments” of life and I was out to catch them.

It was a rough patch in my life, to say the least. There was as much lack of light bulbs as there could be. But don’t get me wrong, I had money, a house, a family, a life– that is, before I went meddling in what I wasn’t supposed to. I don’t actually regret it, though. Truth be told, it was an adventure I needed to take, especially because it caused itself.

Wisps of life are inanimate. At least, inanimate enough to not make connections nor remember anything at all. So when I had the bright idea to quit my job at a calm accounting firm and become an artist, I blame one of the largest wisps of life to ever float in that alternate dimension. It was huge, I’m telling you. Easily five feet in diameter and pulses so unblindingly bright that you simply couldn’t not miss them.

I was walking out from my office door towards the coffee maker for a mid-day pickup when I walked through the first one. It was in front of the copier, I remember. A coworker of mine said they saw me step into it. Or, from what she says, she saw me trip on the carpet. Same difference.

I fell into that wisp of life and quit right then and there. I marched into my boss’s office and demanded a complete pension or whatever grown-up things I needed at the time and stated I would no longer be working for Accounting Firm & Co. for a moment longer.

“Why not?” my boss asked in the monotone voice, just as flat as his wall paper.

“Because why,” I blurted out, my mind taking control of anything my heart said. “Because this place is boring, because I’m losing my mind, because I don’t know what I’m doing any more.” And, surprisingly, my boss seemed to agree.

Or he looked at me disbelievingly. Again, I had just stepped into a 5-foot-diameter wisp of life. “Okay, okay,” he nodded slowly, and it seemed as though he was reaching for his phone. So I just turned on my heel and walked straight out of the place. I walked down the entire flight of eleven floors. And that’s when I walked through my second one. At least 5-feet wide again, I’d wager, and I tumbled down the remaining ten flights. “An artist,” I decided. “And I’ll be world-renown.”

As a grown human being, wisps of life cannot do much more than give me “brilliant” ideas that I follow for the time being. So I bought a new set of pastels, paint brushes, and canvases, completely overlooking Bob Ross videos and starter classes. Sitting in my garage, I sat down on the hood of my car and started painting. The shell of my car was my pallet and the sky was my limit.

That is to say that I sure did have a lot of space, but I would eventually need to establish NASA and be able to build my own space ship, just to escape my own limitations. Because even though the sky seems a far way up, if you go straight upwards, you’ll run out of space far too quickly. And that’s exactly what I did.

“Dinner,” someone inside the house called for the umpteenth time. And again, I ignored it. By now, it was years since my last encounter with a wisp of life and I knew– I could just tell that I was in for another. I was anticipating it like my birthday; I knew it was coming, but I wasn’t sure if it was on the day I thought or if my friends and family would throw me a surprise party.

And I was so antsy, so demanding, so unreliable that I went out looking for it. Naturally, I checked all of the usual places first for wisps of life. The library, the bank, the school yards, and nothing. I sat on a bench then, constantly sliding up and down its length in hopes for catching a casual wisp of life (to no avail), and I came up with it: Where else would wisps of life be other than a place with so much life that it can’t contain itself? Of course.

surrounded me. I was like insanity; a warm, welcoming blanket that tricked you by tripping your toes up in its threads; that covered you completely and let you breathe occasionally; so lumpy that no one could remember your name or how you “used to be”.

It was comfortable. And as I kept walking, I started to forget where I was going. The forest seemed to get farther and farther away, subsequently leaving me to my own devices as where I was coming from seemed to fade with the sunlight.

Eventually I came upon a small fountain. I expected there to be pennies dropped in for good luck, though what good luck a piece of metal that cost more to make than it was worth was always beyond me. Instead there were roses. Just a few, perhaps a dozen, lazily floating in the water. They seemed alright with themselves; passionate about what they did, who they were, and where they were going. They were okay with the live choices they had made and the stems that had held them up. Confident in the life they were living no matter what anyone else thought.