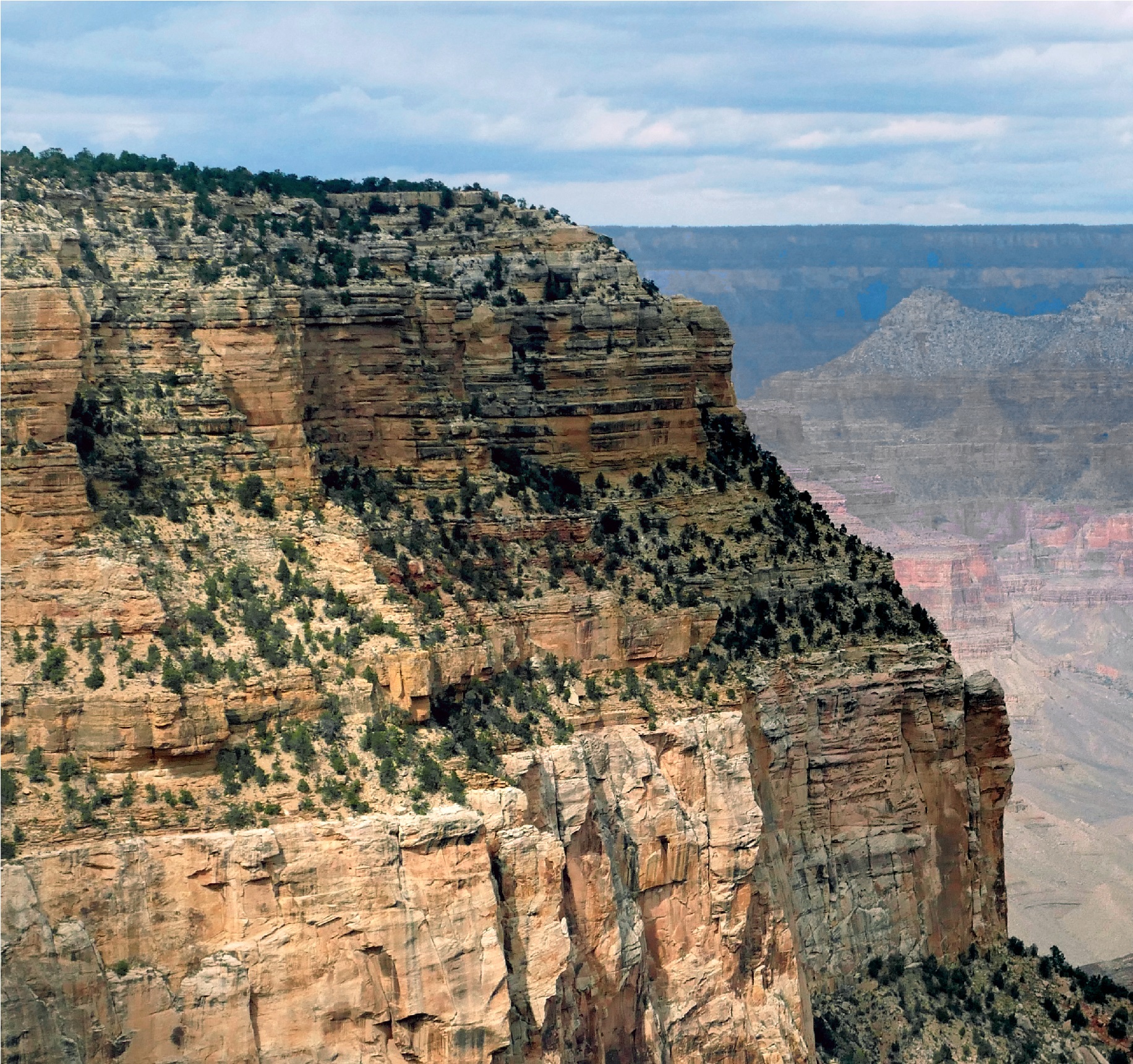 It was the kind of short-cut no one wanted: an extra four hours driving through the set for some kind of impending-doom scene, like Thelma and Louise but without all the symbolism. A cliffside only inches from my door and the sky only getting darker.

And no cell service.

Not that it mattered in 2006. But no cellular meant no GPS either. And some guy in overalls was eyeing our car, standing next to his truck which had supposedly broken down.

“I just need a jump,” he said, our silver Honda Pilot rolling to a stop. His overalls were dirty in an uncomfortable way; dark stains with probably darker reasons behind them dotted the jean fabric in unfamiliar constellations. A woman silently squirmed on the edge of the trunk, the door wide open to let in the draft. She wasn’t gagged or nearly as dirty, but we didn’t know the full story. “Just a spark, please.”

There was a brief pause. I watched my dad’s features, cold and calculated as ever. He analyzed the scene, trying to find the most efficient way to protect his family. He found the solution: handing my mom a knife from the driver’s side door. “Why was that there?!” she breathed, almost dropping the knife in the deep abyss between her seat and the center console. She asked what no one else in the car had the guts to ask in front of the would-be murder that was Overalls. I thought I knew our truck inside and out– after all, we had already been on a road trip for two weeks and would still be going for another two. I guess I didn’t know it that well after all.

“Oh, don’t worry about me,” my dad said loudly, covering up the noise of my mom juggling a switchblade. “Or my wife, haha, we’ve been driving for so long.” He looked at my mom, “Don’t let on that we have a knife. And say nothing,” he whispered to my brother and me. Our faces of horror were confirmation enough for him.

In no time my dad gave the guy a jump and he just as quickly jumped back into the car and left, a crisis averted.

Only to have another crisis emerge. A ways up the road we got stuck, our car desperately gripping the road and failing on a steep incline. The years-old Honda Pilot pulled up years of settled dust and dirt, revealing the desert’s true colors: deep, deep red. I glanced out the window again, perhaps for the last time in my life, to see the cliffside that would be my end. As I was committing each flora and fauna to memory, and I saw the man in overalls walking towards us, the jumper cables in his hands. In the silence of the desert, in the roar of the engine, I could imagine his voice: “I just need a jump, just a spark, please.”

“This is going to be the sketchiest thing anyone will see. Ah’ve got my old ‘alls on, grease covering them, Jesus Christ almighty.”

“Yeah, but do we ever need ah jump,” she said. “Just ask the next car. Look, ah silver truck, just for us!” She made no motion with her hands but rather kept them on her sides, supporting herself as she sat on the edge of the trunk. Instead, she kicked a rock off the side of the cliff and watched it fall.

“It’s– it’s got uh family, full camper and all. Look at that, uh rack for kiddie bikes on the back. Ah don’t want tuh ask, they’ve got kids in the backseat.”

“All the more likely to help us. The wife’ll make him stop.”

He wiped his hands clean of oil and dirt on his overalls and picked up the jumper cables. He held his hands out far from his body in an attempt to seem more open and less threatening. He had read about that online somewhere, that having an open stance makes you seem more approachable. He wished he hadn’t worn his overalls.

“Why don’t yuh ask them for help, if yuh’re so sure they’ll help?”

The silver truck slowed to a stop, pulling up some dirt with it. He was used to the taste of dirt by now, knew he might never taste anything else. “Ah just need uh jump,” he said to the man– the father, he supposed– of the family. There was a little scuffle in the car. He probably has a knife, or a gun, or something, he thought, I know I would. But he kept the smile on his face because if he didn’t, and the family did have something, then he’d know for sure what kind of weapon it was.

There’s a theory about midwest-kindness, a theory that, apart from the rest of the country, mid-west– or basically non-coastal states– have a distinct attitude and specific mannerisms that make them nicer than others. He wasn’t sure that was exactly true, but he hoped so. He smiled wide and slow, sweet like molasses, and tried to give the family space. Even though he would feel comfortable approaching a family like this in town, or on the highway, or literally anywhere else, there was something about the desert here that made him unsettled. Something that told him, don’t trust anyone, something that told him, you could die here and no one would know. So he kept his distance, but stayed optimistic.

“Oh, don’t mind me,” the man said, trying to explain away the nervousness of the woman in the silver truck– the wife and mother, he supposed– of the family. He said something quickly to the children before coming over to help with the cables. He seemed calculated and confident, connecting the cables with one swoop and starting his car with his next movement, almost like a ballet. Suddenly, both cars were running.

Before Overalls could even turn around, the man was already back in the car, waving. No one else in the car looked at Overalls or his wife, but Overall’s wife looked at the kids in the backseat. “Stop looking before they call the cops,” Overalls said, “yuh look so suspicious.”

“Can’t call with no reception,” she retorted. “Ain’t no cops checking Route 400. Ah just wanna get back home already, Ah feel for those kids, stuck here.”

They watched the family drive away, grateful for the quarter of a tank they had left and all the power they’d need to get off of this dastardly Route 400. Overalls and his wife just watched, though, knowing the next part of the road would be the testiest. At the steep incline the silver truck barely  managed to grip the road. “Yuh need tuh chuck the family out and rev it empty,” Overalls shouted. The family clearly couldn’t hear him. He held his hands up to his mouth and yelled again, “DRIVE THE CAR EMPTY, IT’LL HELP!” he’d seen too many cars try that hill today and fail. They just had to drive it with only the driver, and they’d make it.

But he knew they couldn’t hear him; even so, for some reason he felt inclined to help the family. After all, they were the first car to stop for him today. So he did the only thing he could do: he walked towards the truck, still holding his jumper cables.

Computers always think they’re right. They develop these algorithms and patterns that determine the best route from point A to point B, failing to calculate one major point in their data: the human factor. Just because it’s theoretically faster to drive it doesn’t mean it’s practically faster. And that’s where it went wrong.

A silver truck was encouraged to follow the state-of-the-art, 2006 GPS system as it claimed that Route 400 would be the fastest way to a local town. Sure enough, the gullible family believed in their robotic overlord and took a detour that would not only save them an hour, but also add an extra five hours to get to their destination. But that is neither here nor there.

And on this road, like most roads, there are only two types of cars: Running and not. Fortunately for the silver truck, it was a running-type car. Unfortunately for the silver truck, there was a Type II car on the Route that day. The GPS could not have calculated for this; a natural oversight of blind machines that will one day take over the earth.